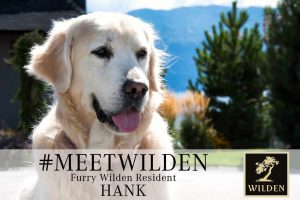 1. What is your name and breed?

My name is Hank, I’m a Golden Retriever and I’m 13 and a half years old.

2. Which Wilden neighbourhood do you live in?

I live in the peaceful Skylands. I recently moved here all the way from Sydney, Australia to retire in this beautiful place.

3. What do you do for work and where can we find you online?

I’m retired, so not much work for me, just many hours of sleeping, eating, lounging by the pool and little walks up the street! You can find me on Instagram and Facebook, I pop up quite frequently there.

There’s not much play left in these tired old bones but when I do play it consists of hanging by the pool and dropping my ball in the water and letting my human throw it out. I also sometimes take my sisters favourite toy and let her chase me around the house for it until she gets really angry!

5. What is your secret superpower?

I wouldn’t call it a super power but I have this strange ability to hear or smell food ANYTIME it is being consumed around the house. Even though I’m mostly deaf now I can still hear the familiar sound of the crackling of a chips bag being opened from ANYWHERE in the house!

6. What are some of you favourite things about living in Wilden?

There’s so many things I love about living in Wilden; the birds, and wildlife are right in my backyard so there is always something to think about chasing (even though I grew out of chasing things a long time ago it’s nice to reminisce); the beautiful 360-degree views of Kelowna; and the landscaping and architecture is very pretty to look at and be around. I also like that it’s very quiet and it feels like you are still surrounded by nature.

Cedar Creek dog beach! It’s no Bondi Beach in Sydney where I used to hang but it’s the closest I’ll get for a while I think!

I haven’t tried out much yet – but my human does love the wine around here… can’t put a finger – err should I say ‘paw’ on a favourite but I have seen many empty bottles of Tinhorne, Gray Monk and NK’MIP being put into the recycling.

9. If you could give $1M to charity, which one would you choose? 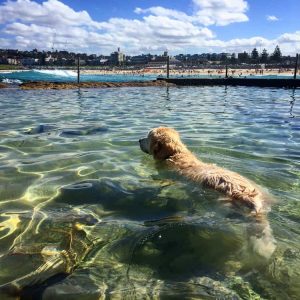 Hank at his favourite rockpool in Bondi, Australia

I would choose the BC SPCA.

10. What is the one thing people would be surprised to know about you?

Most people are very surprised to hear that I’m 13 and half years old, because I’m in very good condition for my age. I’ve been told I look 10…. Even someone said 9 once. My human has taken very good care of me from the beginning which has helped keep me looking and feeling so young.

11. If you weren’t living in the beautiful Okanagan, where would you live?

I’d be back in Sydney Australia, hangin’ at the grassy knoll in Bondi Beach for sure. I’ve also shared a picture of my favourite rockpool that I used to go to every Saturday in Bondi ☺