Home » Blog » Defenders of the Wild

Defenders of the Wild

The Grey Wolf: Keeping the Balance of Predator and Prey. 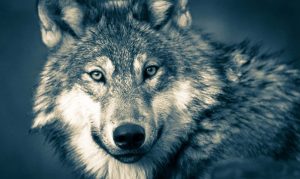 Little Red Riding Hood and The Three Little Pigs would be the first to say that wolves are bloodthirsty and evil, yet on the other hand, the now deceased Canadian author and environmentalist Farley Mowat would have said the complete opposite. Who do we believe, a cute little girl in a red hood, three pigs in overalls, or Farley Mowat, famed author of the book “Never Cry Wolf”?

Without question, the howl of North America’s Grey Wolf is hair-raising. It leaves many people trembling and wondering if there really are werewolves. Howling is a very important part of the wolves’ communication. Howling asserts their territory to other wolf packs, or to make themselves known to their own pack from afar. Their howls can be heard from 10km away.

Grey wolves vary in colour from white, grey or black; however, as their name suggests, they are typically grey in colour. Grey Wolves are about the size of a German Shepard with longer legs and a bushier tail. Their average weight ranges from about 20 to 75 kilograms.

Wolves are pack animals. Wolf packs can be as few as two, but typically the pack consists of six to eight members. There is a strict hierarchy, which is led by the alpha male. The lower ranked wolves know their place; therefore, there is very little fighting within the pack. Typically, the alpha male and female are the only ones that breed. The alpha male and the rest of the pack protect the nursing mother and her pups. They feed them by regurgitation. 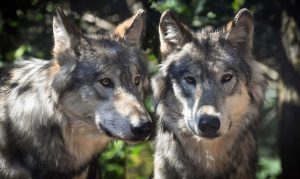 Wolves go after large prey such as deer and moose. They can eat approximately 9 kilograms of meat in one sitting and can go without eating for about a week! Unfortunately, they can prey on domestic livestock, causing conflict with ranchers and farmers. This conflict has caused countless wolves to be shot, trapped or poisoned. Wolves’ tendency to prey on livestock is part of the reason why they have been vilified. However, wolves almost never attack humans, contrary to many stories and fairy tales.

Did you know, wolves are an important part of our ecosystem and have been called defenders of the wild? If their numbers dramatically drop (such as from over hunting), the natural order can become greatly disturbed. Large animals like elk become overpopulated (Yellowstone’s northern valleys depict a great example), causing a negative chain reaction. Stream edges become trampled, trees and shrubs get stripped, causing erosion and lack of valuable shade. There is a loss of habitat for various species including fish, reptiles, birds and water insects. With no wolves, animals such as badgers, foxes, weasels and struggling raptors lose the opportunity to supplement their diets by feeding on leftover carcasses. Wolves help to keep the balance of predator and prey, and like all wild animals they have a place in nature. Interesting note: Once the wolf population was built back up in Yellowstone, the ecosystem became vibrant again.

You might be wondering now if we have wolves in the Wilden neighbourhood. To date no wolf sightings in Wilden have been reported. There have been sightings of wolves in the Okanagan by hunters, more so on the Westside and in Peachland.

All in all wolves are an important part of the natural order. There are many fascinating studies about them. Farley Mowat’s book, Never Cry Wolf is a great place to start. Sorry Little Red Riding Hood and the Three Little Pigs!

October 30, 2019 | Comments Off on Defenders of the Wild
« Improving Youth Mental Health – Building Strong Communities
Looking Back at the 2019 Wild One »
Return to Life in Wilden