Enjoying the Sun & Each Other’s Company 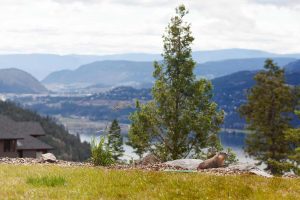 The life of a marmot looks a lot like an ongoing vacation: sun bathing, playing, grooming and nose touching. But when you take a closer look you can see their powerful shoulder muscles, which they use to dig their burrows. The burrows are about a meter deep, lined with grass or soft leaves and have multiple entrances. When used for hibernation the burrows can be up to seven meters deep. Marmots need a soft bed as they hibernate for about eight months out of the year.

There are three different marmot species in British Columbia; however, the Yellow-bellied Marmot is the only one found in the Kelowna area. These creatures are fairly easy to spot with their red brown colour and yellow or orange bellies. Marmots are highly social and are the largest ground squirrel in the world! Their diet consists of plants, such as grasses and flowers. They live in colonies with a dominant male and several breading females with their pups. In some of the colonies there can be a few subordinate resident males, too. Any aggression is usually between marmots in neighbouring colonies.

The Yellow-bellied Marmot is often seen lounging about on the warm rocks, or even along the roadside on cement guard rails; yet, on closer observation it is clear that they are always on the lookout for predators. When marmots see a predator or are alarmed they whistle to communicate, which gave them their nickname Whistle Pig. Coyotes, foxes and wolves are the main predators of the marmot.

Come on outside and look for the Whistle Pig! They are fun to watch with their prominent overbite, little round ears and orange coloured overtones.

The Vancouver Island marmot is one of the world’s rarest mammals and Canada’s most endangered mammal. Its numbers have improved from less than 30 to about 250-300, with on-going recovery efforts.

The Yellow-bellied marmot numbers are stable.