These dinosaur looking animals have been spotted in Wilden’s backcountry. 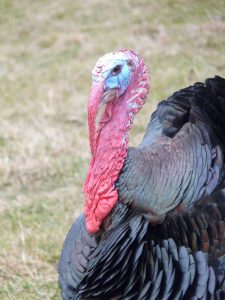 Wild turkeys are magnificent in an odd way; yet, they are not known for their beauty. Their heads are featherless, but the colours on the male’s head are striking. The male’s bulges of rubbery skin are coloured primarily a vivid bubble gum blue and bright candy apple red, especially so during mating season. These bulges are called caruncles. The long and drooping colourful skin at the base of the beak called a wattle.  There is yet another loose, fleshy, and long hunk of skin over the top of the beak called the snood. The turkeys’ feathers are shades of copper with some black. The females are plain in comparison. It has been said that the males look like tiny dinosaurs strutting through the forest, making their loud and comical gobbling sounds. They also hum and make chump sounds. 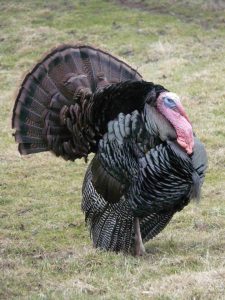 Wild turkeys prefer to walk, but will run and fly especially if threatened. Their predators are many, such as:  coyotes, cougars, Great Horned owls, Golden Eagles, bobcats and human hunters.  Surprisingly, wild turkeys can swim and they do this by tucking their wings in tightly, fanning out their tails and kicking their legs.

The wild turkey mostly eats plant matter, but will also eat insects, snails, and salamanders. They roost up in the trees at night where they are sheltered and somewhat safer from their long list of predators.

Keep an eye out for the wild turkeys (aka tiny dinosaurs) as the males are quite the show stopper—especially if you see one swimming!