Who is that statuesque and golden eyed beauty, with the long super model legs? Well, her legs may not be shapely; her knees are on backwards, and her claw-like toe is rather unsightly. This beauty is the Great Blue Heron. 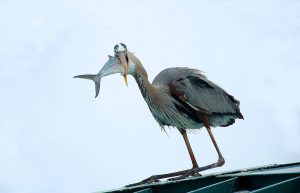 When I first discovered these giant birds, I was intrigued. Each morning, I would head out to the pond to observe them. It was amazing how they could stand motionless for very long periods of time, while waiting to spot prey. I assumed they only ate small fish. That assumption came to a screeching halt when I saw a chubby vole, squirming and dangling by its tail, as it was held fast in a heron’s bill. I gasped and looked away. I then assumed that they must only eat fish and voles. I was terribly wrong again.

One dark and gloomy morning, I looked up into the sky and saw a very long snake writhing and hissing (well if it was not hissing it should have been). The unfortunate reptile was being carried off, clamped in the bill of a hungry Great Blue Heron. What a sight! I looked around thinking I had mistakenly wandered onto a set of a horror movie, perhaps the remake of Alfred Hitchcock’s The Birds. 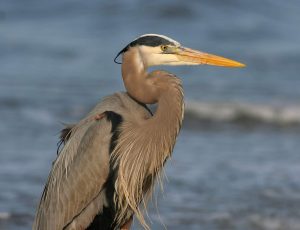 Despite their varied diet, of almost anything small enough to be caught and swallowed whole, they are fascinating. The Great Blue Heron’s shaggy feathers are mostly a blue-gray, with the top of their head being black and white. Its huge dagger like bill is yellow. They have a ‘S’ shaped neck which distinguishes them from similar species, like cranes and bitterns. The Great Blue Heron maintains this ‘S’ shape in flight. Their long legs, rather comically trail behind, are reminiscent of the tail of a child’s kite. The Great Blue Heron may seem to be slow and steady, but they are lightning fast as they hunt along the water or in fields for small animals like frogs, mice and birds. Their bill is used like a dagger or like powerful tongs.

Great Blue Herons are usually solo unless it is in the breeding season and then there can be several hundred pairs. They look for new mates each year with the males putting on quite the elaborate courting show. The Great Blue Heron’s nests are built of sticks and lined with soft materials such as leaves and grasses. They mostly nest in trees, but will also build in bushes or on the ground.

Did you know, the Great Blue Heron

Why not go for a walk along the many Wilden water way trails and look for this super model- the Great Blue Heron.