Stealing the Show & Your Unattended Food

A stunning bird of cobalt blue and black flies from one evergreen tree to another. This is the Steller’s Jay. Its colour is often compared to the sky on a clear day. Along 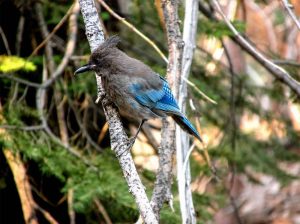 with its beautiful blue colour it has a tall head crest, which makes it a sight to behold. Surely this jay must have a lovely song to match its beauty, but alas a harsh “shek, shek, shek”, is its usual vocals, along with a grating “kresh—kresh”. Steller’s Jays are bold yet cautious. They crash the party at feeders scattering little birds off in a frenzied flutter. Many campers have had their unattended food raided by these blue ‘bandits’.  Yet, during nesting time they appear to vanish becoming silent and secretive.

The Steller’s Jay is entertaining to watch as they jump along the ground or along branches with their long legs. They are a social bird traveling in groups and even playing with each other. Interestingly they have impressive mimicking skills, such as that of birds, squirrels, cats, dogs, chickens, and even some mechanical objects. They are often mistaken for Blue Jays, even though we have none in this area.

Interesting Facts About the Steller’s Jay: