They Slither, Squirm, Wiggle and Hiss.

If they are the topic of a conversation, many people will shutter and gasp at the thought of them and worse yet is the reaction if one is seen. What horrid beast am I speaking of? It is our private, often shy and misunderstood neighbor, the snake. There are people that have a phobia of snakes, they are truly terrified of them. The dislike of snakes goes  back hundreds of years. Many have been killed out of fear and ignorance. 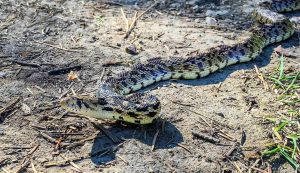 Bull Snakes  have small heads and their tails taper to a narrow point. They tend to be tan in colour and have dark brown rectangular patches along the length of their backs, (this helps to distinguish them from the Rattle Snake with its oval markings along the back). When Bull Snakes feel threatened they will hiss and may even make a vibrating noise or vibrate their tails. (possibly to imitate the Rattle snake). They will resort to biting, for self preservation. 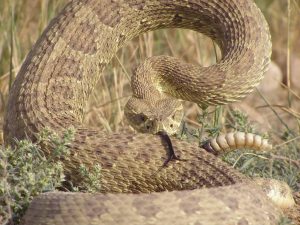 Rattle Snakes have three unique features: a tail rattle, a broad triangular head and a distinct neck. The body colour is tan to pale green, they have dark brown to olive coloured oval blotches on their backs (which is  in contrast to the Bull Snake’s dark brown rectangular patches). They are generally shy and non-aggressive. Their first response to danger, i.e. a human walking by, is to hide. They may shake their rattle as a warning. The Rattle Snakes last resort is to bite if they are harassed, or about to be stepped on or picked up. If bitten seek immediate medical attention for a possible anti-venom medication.  Not all Rattle snake bites are venomous. Rattle Snake sightings are not common and they are along with the Bull Snake a threatened species. This makes it is illegal to kill, capture or harm them in any way.

Even though it is not very common to be bitten by a snake in our area,  it is absolutely recommended to immediately receive medical help in case it happens (this includes pets to the veterinarian). The bite can be washed in the meantime. It is important to let the Doctor decide if medical treatment is necessary.

There are many fascinating things about our resident snakes and there is so much more to learn.

Snakes play a big roll in keeping rodents down. They are considered one of nature’s ‘unlovables’.

Pictures of the Bull Snake were taken during a hike on Wilden trails.