Raccoon Means “He Who Scratches With His Hand.” 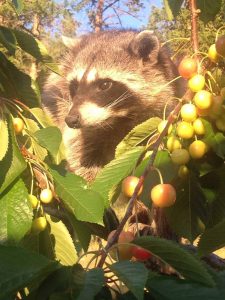 Raccoon in a cherry tree captured by Wilden developer Gerhard.

Known by some as the rascally bandit. Most people know of the raccoon, with its black eye mask and ringed tail. They are one of the many animals in the Kelowna area (including Wilden) that are highly adaptable and easily live close to humans. They tend to be gentle, but can be bold and certainly become aggressive if feeling threatened.

They vary in colour from albino to blacks and browns. Their black eye mask is distinctive as is their fluffy tail, which can range anywhere from five to ten alternating light and dark rings. The male is about 25 percent bigger than the female. They can be the size of a large cat or even the size of a small to medium dog, such as in the Spaniel family.   The raccoon is known for its great climbing abilities. Although they often live close to the water, they only swim when forced to, and interestingly are strong swimmers.

What do they eat? Their diet is varied depending on the area. If there is constant easy access to garbage, fallen fruit, discarded produce from the garden, dog food and goldfish in ornamental ponds, then they will help themselves. They are like many wild animals, why work hard if you don’t have to? Their natural diet classification is that of an omnivore, which contains a wide variety of foods, including, eggs from bird nests, fish, frogs, seeds, and nuts to name a few. They mostly look for food under the cover of night which is good timing for various reasons, including it is quiet and there is less action. This is a great time to search patios and decks for left over human and dog food. There are less chances of having to sneak around pets or to have unwanted altercations. This can happen if either side feels cornered or feels the need to defend something, like a tasty dog biscuit. It is always a good practice to keep your entire yard area clear of temptations for raccoons and other wild animals. 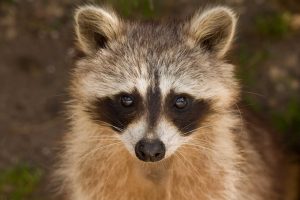 To coexist this is paramount and it keeps the wild in Wilden.