The Pygmy Owl – A Cute, but Ferocious Hunter 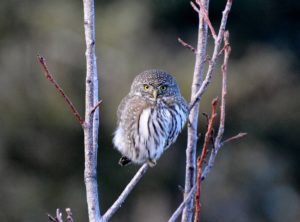 Is that a nest up in the tree or a ball of moss? If it moves, it could be a Northern Pygmy Owl. They are about the size of a large coffee mug, and their colour is an over all, grey-brown. Some of their more notable features are, a white spotted head, a white belly that is streaked with dark bars, and a long tail. Their big yellow eyes with white eyebrows, give them an adorable look. They have false eyes at the back of the head (black patches outlined in white) which adds to their charm.

Even though they may be a vision of cuteness, they are ferocious hunters, praying on songbirds, small rodents and insects. They amazingly, will often go after prey that is larger than themselves. This fast and aggressive hunter will chase birds through the air and rodents along the ground. Yes, even cuties need to eat.

The Northern Pygmy-Owl’s call is a series of toot like sounds, spaced two seconds apart: kook…kook…kook; agitated calls are a trill popopopopopo sound. When song birds hear these calls, they often gather in flocks to mob and harass this little owl. A thought is that its false eyes help to confuse the angry birds and any predictors. If you hear song birds making a racket, look up you may see a Northern Pygmy Owl at the centre of an angry mob.

Where to find this bird:

Listen carefully while hiking, if you hear what sounds like a little toy train tooting along, it is likely a Northern Pygmy Owl. 🙂

For more nature and wildlife articles by Flora click here.