It’s time to ‪#‎MeetWilden‬! Meet the Developer who started it all, Gerhard Blenk! 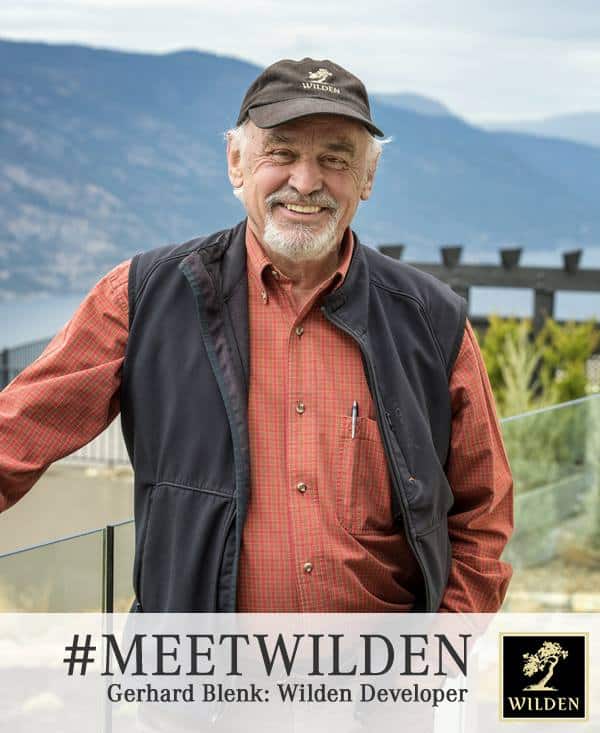 1. How and when did you find the land that is Wilden today?

In the mid eighties when I was still living in Germany I got a call from an Edmonton friend. He told me that there was some land for sale in Kelowna (‘…wherever that is?’ I thought then…). I wanted to visit my Canadian friends anyway, so I took the trip. I fell in love with the beauty of this wild piece of land and the challenges to develop the rugged terrain into beautiful home sites. I assembled what today is the 2,000 acre Wilden land in several purchases from more than 50 individual owners. I developed a masterplan that aims to provide both, reasonable density and spacious properties with vast views. I did not want a ‘snob hill’, but liveable communities for families of all income groups. I think it has worked out so far …

2. What are some of your favourite things about developing Wilden?

Seeing my visions materialize, while seeing my family taking over step by step with the same goals and visions.

3. What is your secret super power?

I used to make up ‘Chippy-Stories’ for my youngest boys, now 12 and 14. Chippy is an astute little chip monk, living in the rocks around our house. Tiny Chippy goes to school, shopping, on trips, while hiding in a pocket, when it sees somebody leaving the house. I found ‘Chippy Stories’ a good way to wrap ‘practical wisdom’ into the Good Night Story… (too bad the two are growing out of Chippy Stories, playing computer games with their friends instead…hard to beat that scrap!).

4. What are some of your favourite ways to relax and play in the Okanagan?

I love to hike with my wife Maria, watch birds and other wildlife. Ride my motorcycle on the winding roads of the backcountry. In winter I x-country ski over the world class trails near Kelowna, or downhill ski at BigWhite.

5. If you were to build your dream house in Wilden, what are some must-haves you would include?

We have our dream house @ Wilden since 2004. On a spot where everybody told me ‘You can’t build there’. We have the view, the nature and the privacy right there with nice neighbours not too far off.

6. What is one thing people would be surprised to know about you?

Maybe that I am not a sophisticated business man but a ‘down-to-earth’ guy that started out as a poor country boy in Southern Bavaria / Germany with nothing but a dream….

The surrounding wilderness, with mountains, rocks, rolling hills, lakes, creeks and the wildlife making it their home.

There is a German butcher with a tiny shop in Vernon who makes an awesome German sausage.

9. If you weren’t living in the beautiful Okanagan, where else would you live?

Since the late eighties we have a place on the island of Mallorca, Spain. There and the place where I grew up, the ‘Allgaeu’ in Southern Germany, would be my favourites.