How Wilden’s Wood Turns into Energy

Thinning out and cleaning forests for fire mitigation creates large amounts of excess wood. Wilden feeds parts of it back into the energy cycle.

Logs, branches and wood chips piled up at the edges of Wilden’s forested areas this spring, while the winter-long fire mitigation work was finalized. Some of it has since been turned into biomass, a renewable source of energy. 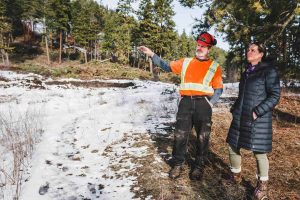 Trees, like all plants, store energy from the sun, explains Forestry Consultant Rick Pasutto who leads the fire mitigation in Wilden. Turning the wood from the clean-up into biomass is a way of recovering this energy. Although burning the forest fuel in controlled fires is less costly, the Wilden crew decided to grind and recycle a great proportion into renewable energy by consigning it to Merritts cogeneration plant.

Both heat and electrical energy are generated from biomass in Merritt, which is where the term “co-generation” stems from. The heat that results from producing electricity is captured and repurposed instead of being released into the environment as exhaust. 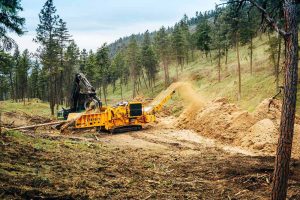 The bigger logs that were pulled out of the Wilden woods were donated to a local alcohol and drug rehabilitation group, Adult and Teen Challenge BC, in order to support their programs.

“Wilden is among the more proactive land developers going far beyond the requirements in order to upkeep the health of its thriving nature and contribute to the energy cycle”, says Rick Pasutto. In his video interview he explains that “there is no pretty way to do wildfire mitigation. Having said that, it’s still a lot better looking than a forest fire.” And while it might not be pretty, Ricks company, RJP Holdings, ensures the mitigation work is always approached with the softest footprint on the environment in mind.

Thanks to higher precipitation this year the affected areas in Wilden’s backcountry will recover well. Within the next 2-3 years it’ll be hard to tell where trees were taken out. Restored in their natural balance, Wilden’s forests will thrive even more than before.