The Clever Crow – by Flora McLeod

Find out more about the common American crow, which  is one of the most intelligent birds. 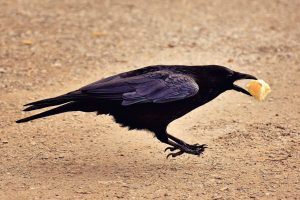 Have you ever heard a dog whine, or heard someone laugh or cry, but could not see the source of the sound? What about walking underneath a tree and feeling bits of pine cone drop on your head? If so, try looking up for the culprit could very well be a crow. A clever American Crow may be showing off some mimicry skills, and is likely trying to deter you from getting too close to a nest.

Crows are intelligent and inquisitive. They have been known to make tools to get at food sources, such as using a stick as a probe.  Indeed, they can often be seen cracking nuts by dropping them on the road. They also have a playful side demonstrated by their barrel-rolls through the sky or playing tag with each other.

The American Crow’s mating habit takes place on the ground. There is a courtship display acted out for the female. The male fluffs his feathers and fans his tail, all the while he bows repeatedly and makes a rattling sound. Once they have mated, they may perch together to touch beaks and to preen each other. They tend to mate for life. 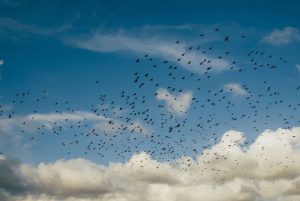 Crows are very social, and sometimes form flocks in the thousands. Usually the young will help the parents raise the next year’s nestlings. It is hard to believe that the crow is classified as a songbird. I would not describe its voice as melodious and lovely, especially when cawing in the morning.

Crows are adaptable and eat almost anything including carrion. They are a frequent nest predator, consuming eggs and nestlings, even from the mighty Great Horned Owl. Crows will also hunt and eat small animals such as mice. Yet, the crow is primarily a ground feeder and consumes large amounts of bugs, worms, seeds, berries, and grains.

Early Spring is a great time to observe American Crows due to the lack of leaves on the tree. While you are looking out for crows, keep an eye out for their nests which are bulky and typically large.  Lastly, be sure to watch out for falling bits of cones and sticks, and the cheeky “laughter” from the clever American Crow.

Is there any wildlife you are interested in and would like to hear more about? Shoot us an email at [email protected] and let us know. 🙂