The Chipmunk – Fun to Watch, Hard to Catch

Humans like to watch them, dogs like to chase them. What would Wilden be without these little entertainers? 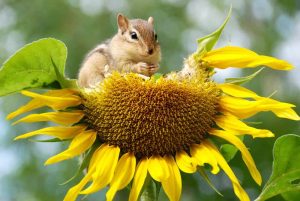 “The bush shimmied and shook. I took a look and caught sight of a very striped something. Was it a little bird? Looking closer, I saw a furry tail and a tiny nose. There in the bush was a chipmunk. What an adorable sight. The little fellow immediately began to chip and squeak with annoyance at me. I was disturbing its feast of plump Saskatoon berries.

The most common and smallest species in this area is called the Least Chipmunk Tamias Minimus. They are easily distinguished from squirrels by their showy black and white stripes. These stripes start at their noses and go to the base of their tails. Their overall colours range from yellow-grey to brown-grey.

Chipmunks live in burrows and use them to hibernate over the winter. They busily collect food, carrying it by filling their cheeks. They then store it in their burrows for the cold months. They have a fairly wide range of foods, with nuts, seed and berries being their favourites. In the spring, young shoots, leaves and flowers are among some of the foods that supplement their diets. Although they collect a lot of food from the ground they can easily climb trees, too.

In the spring females give birth to four to six young. Surprisingly, it takes approximately five weeks for their eyes to open, yet by September they are adults! 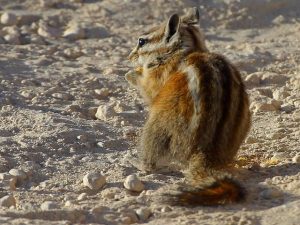 Chipmunks are a joy to watch, especially when running through clearings with their tails straight up in the air. It is almost a sure thing while hiking or camping to see these little entertainers. As with all wild animals, it is not appropriate to feed them. It is important we allow them to live naturally and to eat their natural diet.

Hiking and camping would not seem complete without seeing a few chipmunks to make me smile.”

Did you know that the chipmunk has been referred to as many different names in the past? The name chipmunk might have originated from “chitmunk”, from the native Ottawa word jidmoonh, which translates to “red squirrel”. Beside that it’s also been called timber tiger & striped squirrel. Which name is your favourite? 🙂