There are many myths about bats; they are about to be revealed.

As a child, I remember thinking how strange it was to see these small birds flying around in the dark. I wondered what they could possibly be doing, and why they were not bumping into things. It was not until I was older that I realized they were bats!  Urban legend would have us believe that bats are dangerous, rabid blood-suckers seeking out human hair to get caught in. On the contrary, these peaceful little winged mammals tend to be misunderstood and wrongly made out to be villains. 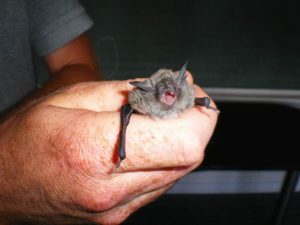 There are fourteen species of bats that live in the Okanagan-Similkameen and eighteen species in all of Canada! The reason is due to B.C.’s diverse habitats of forests, lakes, ponds, grasslands and rocky bluffs. Bats are a protected species and some are endangered due to a loss of habitat. They are nocturnal and it is important to note that they are not blind.  According to the Community Bat Program of B.C., much more research is needed to understand this animal in particular areas such as hibernation and migration (there are three species that migrate outside of Canada).

The two species you may observe the most are the Little Brown bat and the Yuma bat, which are often mistaken to be the same bat.  Bats have a great capacity for consuming insects, including mosquitoes, which makes them valuable in the ecological system. They can consume up to three quarters of their weight per night in mosquitoes, moths and other flying insects. They use echolocation for navigation, sending out signals of sound energy which are reflected back revealing objects and food. You may be surprised to know that they nurse their young and usually only have one offspring. There is a misconception that they are infested with rabies, it is estimated that less than .01% carry this disease. As with any wild animal only handle if absolutely necessary and with the proper precautions, always get medical attention if bitten. If you find a bat in your house likely it is a juvenile who is lost and desperately trying to get out. Often by just opening the outside doors and windows (while closing the inside doors) is all that is needed for it to exit. 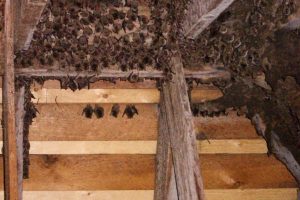 Bats in the attic of Peachland Primary School

What to do if you have unwanted bats in your attic (or belfry). During spring and summer they roost hanging upside down in groups called colonies. Males and females tend to be in separate locations.  In the fall (approximately mid-October) they leave to hibernate in rocky crevasses or caves. Their bodies need a fairly constant temperature during winter to ensure their survival. This is in the case of the Yuma bat. Once your uninvited guests have left for the winter, this is the time to seal up any bat entrance holes (as small as 1\4 of an inch) with a flap. A flap allows any that are still inside to be able to get out, but not back in again. Consider providing them with a bat house, which can be made or purchased.  As they are very persistent in trying to get back in, and this will ensure you enjoy the benefits of bug control while helping to preserve them. Half of the species in BC are listed as vulnerable or threatened.

***A big thanks to BEEPS- Bat Education and Ecological Protection Society for sharing their pictures with us. Learn more about the society and their mission to protect and preserve the bat species in Peachland here.***